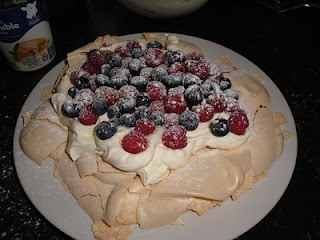 Pavlova is one my favourite puds. As you can see from the picture it very nearly became an Eton mess. In the book this is meant to be an apple, blackberry and quince pavlova but we had a load of raspberries and blueberries in and some egg whites that needed using up so this was the result. I don't think I cooked the meringue for long enough though, I got a bit nervous when it started browning. Which is daft because I've made meringues so many times and they've been fine. These had quite a spongy centre but the outsides were lovely and crispy. By the time it hit the bowl it was definitely an Eton mess, thankfully it all tastes the same.
Posted by Mumof2 at 10:04

Mumof2
A Mum of two who has a slight obsession with all things baking, especially anything sweet. What better way to keep myself busy while I'm on maternity leave.